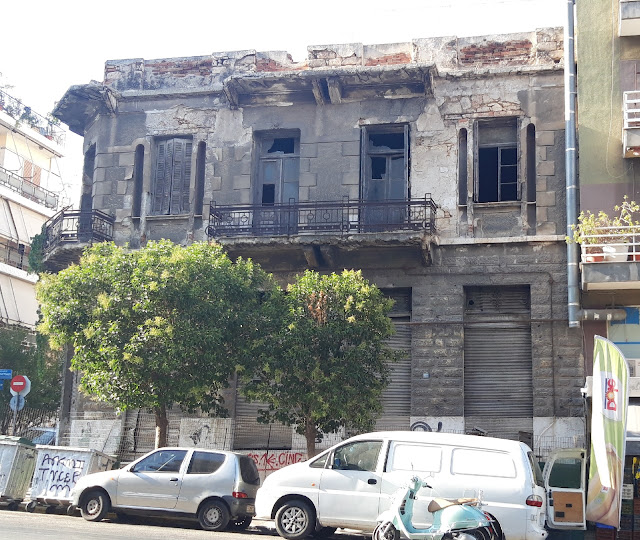 On one of those evenings when we took a devious route home, we stopped to contemplate this building.  Once upon a time it was probably somebody's pride and joy; a house - or shops with apartments over, balconies, stylish shutters.... It's a sad building now and there are lots more like it in Piraeus.
Blame the Brits apparently - so it goes, the Allied Forces bombed the daylights out of Piraeus to speed the departure of the opposition in the closing stages of WWII, and the Brits bombed the remaining daylights out of it again in support of one side in the civil war that followed.  We haven't done our own historical research on that and are simply reporting the story as it is told here.
The old face of Piraeus took a bit of a pasting in and after WWII regardless of who you blame for the damage.  What followed was a period of rapid population expansion as people were encouraged to move to Athens and Piraeus from the islands and rural parts of Greece (1950s-1970s in particular).
That would have been boom time in the metropolis.  Residential buildings must have been growing like mushrooms, and they weren't always the best quality or most sensible designs, but they housed people.  Owners of derelict, destroyed, or simply 'old' homes were encouraged to part with them to developers on the basis that they would get in exchange two apartments in the apartment block that would replace the old house.
Rather too late is seems, someone came to their senses and realized that very little remained of Piraeus' historic residential architecture, and a ban was slapped on further destruction.  Now they just slip quietly into decay unless the families who own then can afford to restore them, or can find a business willing to take them on as commercial premises and restore them.
So the next few photos give you some flavour of the old either maintained or restored.  And we think they have a charm that is definitely lacking in the modern.

At the other end of this time line here are a few apartments currently under construction around us.  This one was a hole in the ground until the middle of last year.

This one shows you the basic construction method that doesn't seem to have changed all that much since the 1970's - concrete structural elements, filled in with brickwork, plastered over.

There are a few altogether more modern apartment blocks and this photo show three generations of housing.  The oldest single story cottages are far left partly behind the bus.  They are derelict and inhabited now by some homeless street people and their dogs and their recyclable waste collections.

There remain one or two small single storey homes with their little yards or gardens still occupied and wedged between newer and bigger properties in streets around where we live. In other parts of Piraeus, further from the centre, their concentration is higher - and their neighbours lower.

My Environment Neighbours Observations on Humans