November 28, 2013
Cat Stuff
+
A note from Tigger’s Mum; (Tigger would never tell you all this himself). Cat owners know that cats communicate with humans in myriad ways.   Tigger is not a particularly vocal cat, howls if trodden on, but can produce a remarkable moan if disturbed in his sleep.   Sometimes we can repeat the moans back to him and what follows is a sort of tit for tat sing-song of variable pitch moaning – a sort of duelling banjo/guitar, shades-of-Deliverance type effect. Tigger also communicates by contact – a quick pluck at the side of the bed at 0500 hours means “I want to go outside – let me out now.”   A claw in the thigh when you are sitting at the dining table means “I want that seat – yes, that one you are sitting on.”   Cat owners assert that their moggies convey a wide range of emotions using facial expression.   That might just be cat-owners anthropomorphising, but if you have owned a cat there will have been times you are sure you have seen annoyance, pleading, disgust,
0

The Cat Who Came in From the Cold

T'internet can be a wonderful thing and What did you do with your Saturday?

When the Moon Hits Your Eye Like a Big ...

I'm Not Ignoring You

Do You Ever Get Writer's Block?

Day in the Office

We have been to the beach the last four evenings. I've found a little patch of sand between some rocks and adopted it as my new favorite place.  I make a little hole in the sand, moisten it a bit and fill it in again and then sit there a while breathing the heat off the surrounding rocks. Friday evening we went down in daylight.  F sat on a rock beside me and together we watched the light drain from the sky and the 'Batty-Bat Aerial Stunt Team' gathering from 1 to 2, then 3 and finally 4 flicking about collecting their dinner.  F casually told me they are 'flying mice'. Mice with wings? What freak of evolution decided that mice needed wings? They are hard enough to catch land-bound on legs. They don't fly like birds - I'll give her that. We sit for a while watching the city up above us: walkers, joggers, people on balconies, cars, motor cyclists heads (we can only see their heads). Someone further along the rocks lights a cigarette; we see the flare of their

When the Moon Hits Your Eye Like a Big ...

... Apricot? I know, I know ... it's 'like a big pizza pie', but that's corny isn't?  Besides my humans (particularly Mr B) make pizzas.  They never call 'em pizza pie . Just 'pizza'. After three days of strong wind and rough sea, a vet day, and on not much sleep, F looked at the now calm (and empty of swimmers) sea around 2030 and gave in and went for a swim. She thinks I was sleeping but I watched her.  If she fell asleep and started drowning someone would have to raise the alarm .... there's a cat to feed. She sculled around on her back and I could see she was watching the swifts scything around in the sky.  Then she pointed out the moon rising over the rocks on the sunrise side of our inlet just as the last of sunlight was draining away on the other side of our firmament. She later commented that it looked like an apricot in the sky.   An apricot?  Really?  I suppose it was round and about the right colour - one of the pale ones. It doesn't

The container port in Piraeus is being expanded with the support of some Chinese investment.  We saw some new container cranes arriving the other morning.  There must be a lot of something below the part we can see - you would expect a ship loaded like that to tip over. Today's early morning view over the Saronic Gulf revealed 15 ships and 2 small fishing boats, but the day the cranes arrived they were out there all by themselves. What do you reckon this is? The box is printed up in about 16 European languages, but a tiny barcode label on the bottom says "Made in PRC".  In another sense of the term, a Chinese investment.  Despite the display of linguistic variation nothing even remotely resembling Chinese text appears anywhere on the box.  Maybe only Westerners buy water fountains for their pets. Yes, that is apparently what this is, a drinking fountains for cats.  I simply couldn't have cared less when F showed me.  A chip in the floor veneer 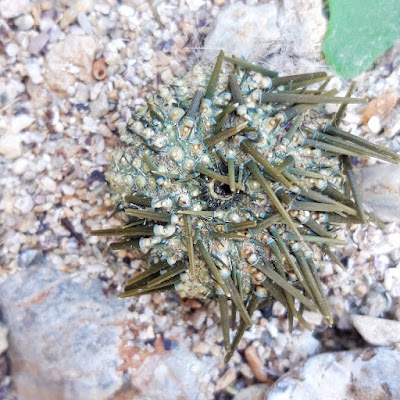 Usually when we go to the beach we sit looking out at the sea, well F looks at the sea, I practice that trick where you acknowledge something and let it go, so that the thought of such a big body of water can't keep tugging at my anxiety triggers.   Breathe in.  Breathe out. Focus on the sound of your breathing. Today we spotted something different: F called it Kina (although where she comes from the variety of Kina is a bit bigger), and then explained that they live in the sea, are black when they are underwater and alive, are covered in sharp spikes that break off easily, and they jump out at the soles of the feet of humans who walk into the water. And that hurts.  (Hurts the human.) So why DO humans go in the water?  It just gets curiouser and curiouser. Kina are apparently a sign that the water is clean. Anyway the dead kina made us look closer, look in instead of out, look down instead of up, and get real close to the sand.   I like real close to the sand, but F st 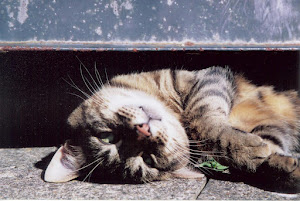 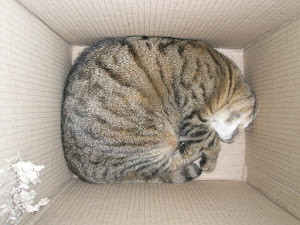