Nice stroll about town sort of day (until it rained).

So we have photos of stone buildings, orange tiled roofs, cobbled streets, narrow alleys, stone tiled roofs with moss, trees (lots of trees - autumn colours and evergreens), statues (very clean ones given that they are in parks and under trees), churches that are unusual in our experience of Greece, vege gardens, ducks & geese, turkeys, views of mountains and forests, and distance villages.  By the time we got to cafes, souvenir shops, cheese shops and potted geraniums F's phone battery had expired, so you just have to imagine that bit.  Souvenirs here have a strong bias to things made out of wood. 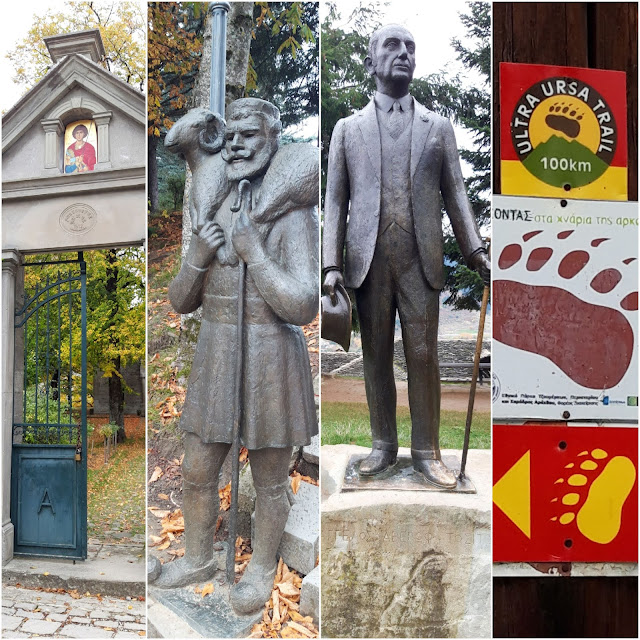 Second from right is K. Averoff - major benefactor of the town. Epirus Way is like the Pennine Way .... with bears. 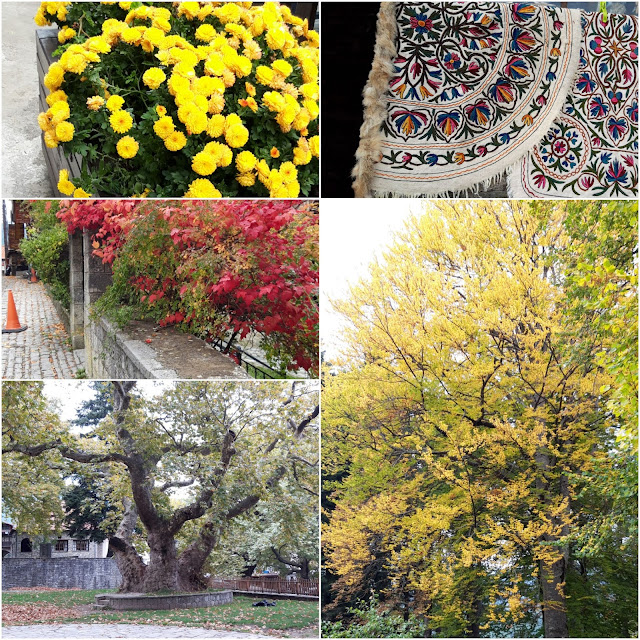 From here photos are in exactly reverse order - so review in reverse your way around our little walking tour.  It ended at ths winery (my humans might have taken a devious route but it didn't deceive me; I knew where they would be going.)

Common sight  in this town - the ubiquitous wood pile. Wood smoke is curling out of chimneys already. It was near this one I saw my ducks, geese and turkeys, and a lady collecting up walnuts.

Several veg gardens were being treated to a clear-out, pumpkins harvested, soil dug over to fallow for the winter.

St Georges. Spying it first through the gate below is better. I had a ramble around in the church grounds and we chased some autumn leaves and piled up shiny chestnuts.

The path to the church has very rustic cobbles.  Wood based souvenirs dominate the memorabilia available for tourists to spend money on. The other thing (which tempted F) were stacks of casserole dishes - the kind they might bake kleftiko in. Casseroled meat seems to be popular here (and I confirm it is very tender and nice to eat.)

Mossy stone-tiled roofs are really only in the town centre.

This immaculately clean marble statue (situated under trees) has been treated to the job of oversight of community refuse bins.

A fairly typical cobbled street. Pay attention - no litter.  This is the cleanest town imaginable. It's inhabitants clearly have pride in their place and it is not immaculate because they have an army of never sleeping street sweepers; it is noticeable that nothing gets dropped or randomly discarded. Even the tourists appear to respect that. 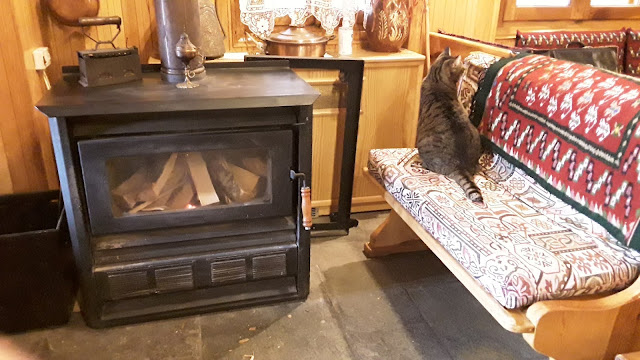