We are back. Back in Blogland that is. We walked around our empty apartment in Piraeus at 1900 yesterday saying 'thank you for being our home for nearly 4 years'. F made me thank the cupboards I hid in.

My Condo got left behind. 2 cats are moving and they can enjoy it. F said I can have a new Condo back in England.

My van is jammers. The roof box is full. The cubbies in the back are full. The gaps between front and back seats are full. Me and my tartan bed and Stripy Friend have 1/3 of the back seat.  Allegedly my luggage takes up considerably more space but I admit to nothing.  Just as we are leaving Mr B discovers a light isn't working on the van.

The time that was meant to be our last Piraeus taverna meal was spent parked up by the ferry berth pulling tail lights apart and fighting (by torch light) to replace a bulb. Fortunately there was a kit of spare bulbs stored in the van (and they accuse me of loads of peripheral stuff!) I supervised.

I have done a lot of supervising the last few days. Here I am supervising men packing up our home.... 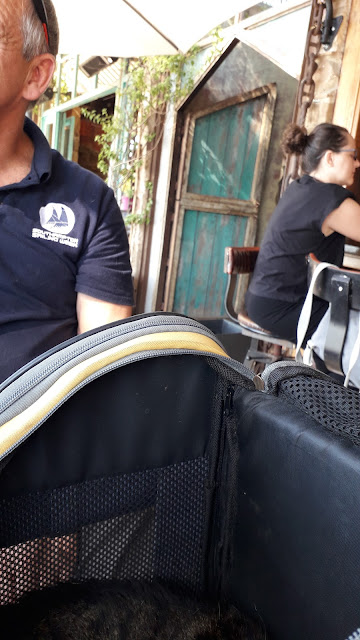 ... and there I was supervising coffee drinking at the cafe next door while boxes are being elevatored down from our apartment. The barrista messed up his froth patterns and made a new design just for me. 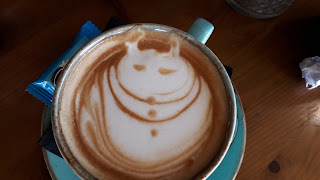 After fixing van lights we queued, our van got parked in a big parking building, and we wandered about in a sort of hotel that did a lot of humming and buzzing. Mr B said 'ferry'. F said just think of it as a slightly bigger van with a 'litter tray' for humans (our little van doesn't have one of those).

I did hotel inspector. All basics accounted for but I was refused an inspection of the corridors.

This morning we appear to be in a different place. I'm told this is Crete. They say Cret-eh. 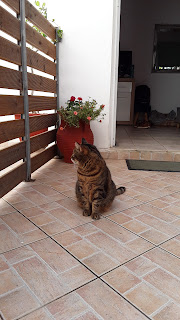 We have a little 'studio' with an enclosed courtyard. Very pleasantly shaded. Bouganvillia. Potted ferns. Quiet neighbourhood close to the Eleftherios Venizelos home. (We stopped in a square named after E Venizelos at silly early oclock this morning to drink yet more coffee and contemplate a statue of the man himself with a pigeon sitting on its head, and kill time until we could check-in.) 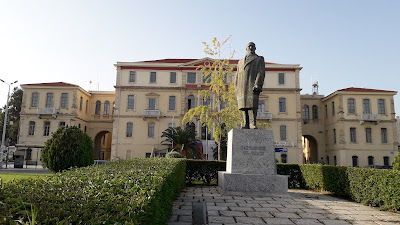 I have to defend the yard against feline cousins - ones that cosy up to humans.  And I want to explore the neighbourhood beyond.  However, like hotel corridors, it is apparently out of bounds. Mr B blocked up the gate with a clothes rack but I still found an escape route through a drain hole.

That scared them. There is a jungle across the street, and I was just doing a recce from behind a parked car when they swooped on me. F made me go back in through the drain just to prove I fit. Of course I fit. (I had to drag myself through command style though, which F found very entertaining.  She chuckled about that for ages.) They covered my escape route with a potted fern. 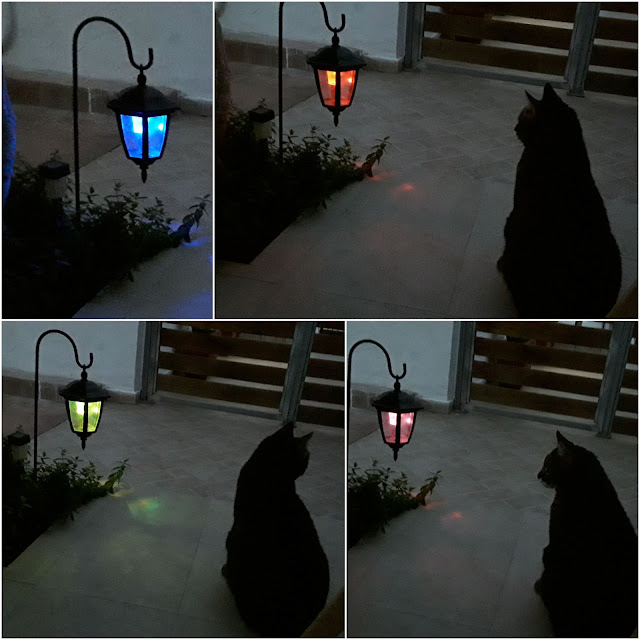 My humans slept in the middle of the day. Now we are relaxing in a darkening courtyard watching a little lantern change colours, and listening to evening sounds. There are no motorbikes, no roller skates with rock concert sound systems, no buses, no sound of the sea (but the sea is only 100m away).. The neighbours are fixing up a very tiny, very (very) old house and making a few power tool noises but you could forgive them that, the little house is on the cusp of dereliction so hopefully they can pull it back from the edge and make it into 'cute' like our studio.

Red wine has made an appearance.