Psiloritis. It is the middle mountain bit of Crete. F read about it in an aeroplane magazine years ago, and tore out (and kept) the pages. One place in particular had sparked her interest - Margarites, with its 18 ceramics workshops. 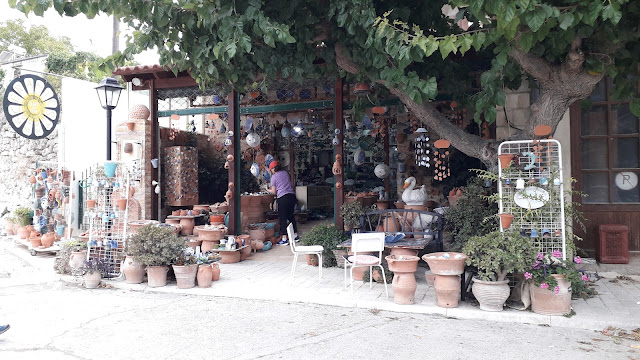 We went there. It is about an hour driving from Astyraki where we are staying. (Diversion here to say that the roads on Crete are much better than their reputation among our Athenian neighbours. Better than many parts of the Peloponnese for example.) En route we passed through Axos and got held up in a Total Gridlock when the bakery delivery van arrived coming the other way. It stopped facing us on our side of the road. Traffic from the other direction also stopped so that drivers and passengers could buy bread. Traffic behind us piled up. Folks reached in through what seemed to be the permanently open side door of the bread van and helped themselves, paying the driver as they meandered back to their homes and vehicles.  Eventually the traffic cleared, the bread van drove off, side door still open, and my humans realized they had stupidly not bought any bread.

Our arrival in Margarites from the downhill side coincided perfectly with that of two large coach loads of other ceramic seeking tourists arriving at the top. Naturally there wasn't passing room in the narrow lane through the village.  We had to back up, multi-point turn around in the doorway of a ceramics kiln shed, and head down to some parking we has seen at the bottom. As F worked her way up the lane on foot, visiting workshops and making notes, here came the coaches, inching their way precariously round corners, hairsbreadths from jutting balconies, lots of shouting in Greek from inside and outside the coach, arm-waving and blaring horns to try and get parked cars to move.

What idiot lets huge coaches drive through that village? Even the shopkeepers looked alarmed and thought this display unusual - staring out from behind firmly closed doors.

F bought bowls (of course she did). They are wrapped for the journey home so no photos here. Before we left Piraeus she took a couple of chipped plain white (Tesco) soup bowls downstairs for the cousins to dine from. She reckons she has replaced them with colourful handmade bowls for less money than plain white industrial replacements would cost from the same supermarket in UK. That is her justification for leaving Margarites with 7 new bowls.

I still dine from stainless steel.

Tonight my humans dine on a meal cooked by our hostess.

Our scary moment was a flashing light on the van dashboard instructing us to STOP. There was some scrabbling for the handbook under the seat and it told us that one of about 5 things could be wrong with the brakes and that we should immediately contact a dealership.

Who writes these instructions? Have they never heard of Sod's Law? You know, the one that says you will be 4 hours drive and half way up (or down) a winding mountain road from the nearest dealership and you won't speak the same language.

Mr B had the brakes serviced and parts replaced (at great expense) just before coming out here a month ago. He checked something called a reservoir, and announced it still full. The handbrake was not on. Whilst we were contemplating this the warning light went out and nothing bad happened to us. I was sitting on F's knee and could tell she was a little tense for a while but we have relaxed again now.

Some more of the needlework in our 'tradtional rooms'. Cloth on the dining table. 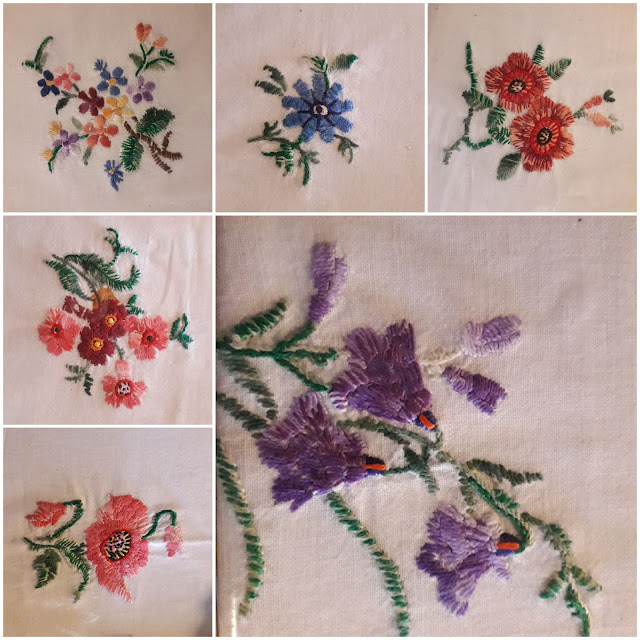