Today is breezy. Wind overnight partly opened a plastic folding door that encloses an understair space on the house next door. I found the gap. Mr B spotted me squeezing through.

It might have been interesting. I gave it another try while he was cooking his breakfast but he seems to have latched the door and F spied me trying to wiggle it open again. 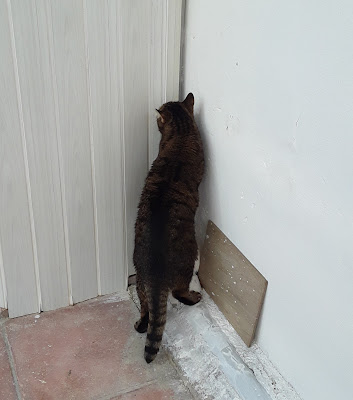 My humans pulled themselves together by midday and went off for a walk. There was discussion about me joining them, but I had settled down for a siesta by then so I did not have to accompany mad dogs and an Englishman out into the midday sun.

They returned smelling of beer and ice-cream and said the Old Town was indeed old, and was pretty much as we have come to expect .... wall to wall holidaymakers, bars, cafes and tavernas cheek by jowl and jam-packed with said holidaymakers. Shops selling trinkets, and clothes a human would never survive wearing in England, filled any available space between cafes and eating establishments. Some trinket shops had established themselves on fishing boats in the old harbour.

They brought me some photos taken in the less well-trodden streets and on their return promptly fell asleep again.

Is this what holiday really means? I am accustomed to seeing something new every day. At this rate I will have to shunt that potted fern away from the drain and go out to find things to report on. 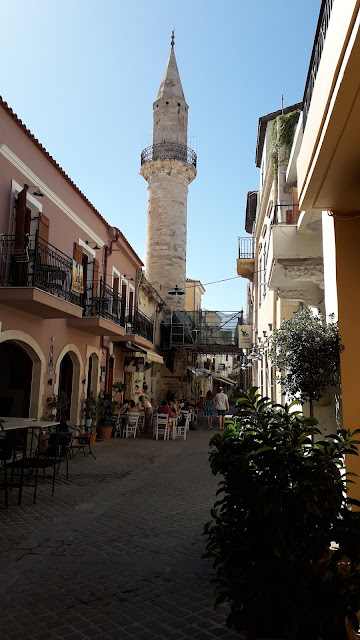 Chania is under my right back foot. I am making like the Dorians, Samians, Aiginians, Romans, Sarakines Arabs, Byzantine Empire, Venetians, Ottoman Turks, Italians, Germans and Austrians who all "set foot" on Crete in the last two and half thousand or so years (according to the potted history on the map - English version obscured by my tail). Some stayed longer than others. The Venetians had about 400 years of contributing to the culture and architecture of modern Crete, and Chania Old Town and in particular its harbour display their influence.
Travelling