Actually I'm not fond of ice-cream, I just like the going out.  The ice-cream shop is about the distance of one block away on the road that hugs the coast, so we walk along past the bars and cafes, the betting shop, the 'couples' hotel, the take-away coffee 'hatch' in the side of a building (that opened during lockdown, did a roaring trade, and now is as quiet as a grave), past the little fish taverna on the corner (that is so small it only has outside tables - and looks like the cooking is done in the basement of somebody's house), past the offices of the Metropolitan (something to do with the administration of 'the Church'), and there it is: 'the ice-cream shop'.

Their display cabinet of ice-cream is right on the street so I can look at it without us going indoors. They know us now, the woman speaks to me in that silly voice reserved for cats and babies, and F hands over the cup she brings with her and gets two scoops of ice-cream - usually a flavour called 'kaimaki' with morello cherries; occasionally bitter chocolate.

She has tried and rejected a lot of other flavours because humans put some very strange stuff into ice-cream.  One we got in Kiato was kaimaki with tsoureki, and was pronounced thoroughly weird.

For the uninitiated tsoureki is sweet (very sweet) bread that Greeks eat at Easter time.  F advises that using up the leftovers in ice-cream didn't work for her. We digress - AGAIN!

In the winter time we would sit on the rocky beach and I would watch humans eat ice-cream.  In the summer time the beach it too hot for F and animals in fur coats, so we walk home again on the shady side of the street; F eating ice-cream and trying to not drip it on my head.

Most people get their ice-cream and coffee in single-use cups and don't feel the need to take them home.  Result: 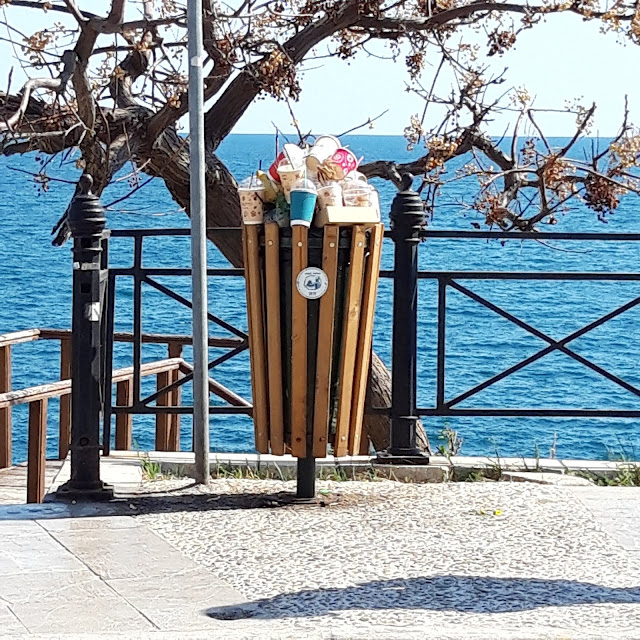 F's friend Laura (who is a young and enthusiastic eco-warrier) has an instagram account in which she posts stuff like photos of this bin followed by a photo of what she calls 'the solution'.  It took her so long to arrange and photograph her cup of ice-cream and the napkin on a rock with a suitable view of sea in the background, that her ice cream was no longer ice (and possibly not all that much cream when closely analysed).  Still, we support her principles and the enthusiasm with which she tackles stuff like this.

I've seen these outside some ice-cream shops.

F says 'creepy'.
I say  'What's creepy about that?'
I'm told that humans look for faces all over the place (cats don't), even in inanimate objects like motorcars and fibreglass representations of ice-cream cones.  Humans imbue some things with a quality of being friendly based on the proportions of the 'face' and this model, I am advised, induces heeby-jeebies.

Is it just F or do other humans think this 'ice-cream' is off-putting?