F set off early and I watched her walk out of sight stage left...

She was back about 4 hours later coming from the other direction. There was a brief refuelling and a change of shoes and she set off again.  The second leg didn't take as long and by 1300 she was home changing into swimming clothes and telling me she had walked 30 kilometers.

Why would you do that?

It seems her London colleagues are going to walk over every Thames bridge in London on 24 June, probably as a charity fundraiser. F always participated in their challenges (3 Peaks, South Downs Way, London to Brighton bike ride, 100 km Thames Path walk...) and they have invited her to this one.

She can't leave me.

She can't take me with her.

She offered to do a 'walk in support' over here, and then, thinking about it, decided walking 30 km on June 24 would be a recipe for heat stroke. Today hasn't been cool, but the weather is unlikely to get cooler between now and September, so she charged out early  today and ripped off 30km (then went and soaked herself in seawater).

I'm pinning her legs down now to make her take dictation for my blog post. 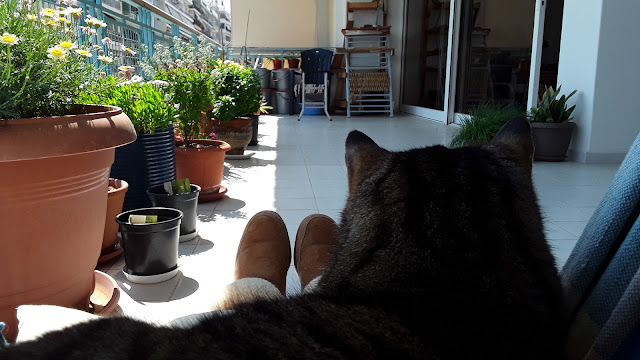 She's wearing wooly boots on a hot day. She always wears wooly boots after she has been walking a long way. She says it makes her feet feel better. Weird.
Observations on Humans