Aunty P will be pleased.  She hated the acacia down on the beach.  F loved it.  Prickly darned stuff, I loved it too, but for different reasons.  I was never allowed to get myself mixed up in it because F couldn't get me out - that was the whole objective from my point of view.

F's love of it stems from her love of all things that grow, and particularly things that grow in difficult places with challenging conditions.  Hardy stuff.  It shielded the rocks, protecting pockets of soil from washing away in heavy rain.  It shaded and kept temperatures underneath a fraction lower than the bare unshaded rocks.  It provided homes and support for a variety of insect life that in turn supported local bats and birds, and mice and rats and lizards, and in their turn hunting opportunities for a few feline cousins who live at the top of the coastal food chain here.

The cousins who live on the beach always look healthier than those who hang around the apartments, so something must be working in their eco-system.

Last week a group of men armed with small chainsaws started attacking the acacia. To be fair some of it was growing out of the ancient human created stone-works that were the original fortified walls of Piraeus.  Those walls have survived a couple of thousand years by not being forced apart by the expanding roots of invasive plant species.  If you like conserving the evidence of human modification of the landscape then you take steps to remove the acacia,.... and some other legume-like trees that had begun their assault on the rock 'formations'.

Remarkably the forcing apart done by the expanding roots of the larger and more forceful eucalypts planted around the cove remains unchecked.  Go figure!

Today a truck with an impressively large claw turned up and reached way down over the edge of the road and fetched up handfuls of the acacia slash.  Then there were crunching and crackling noises as the sticks and branches were forced down into the truck. 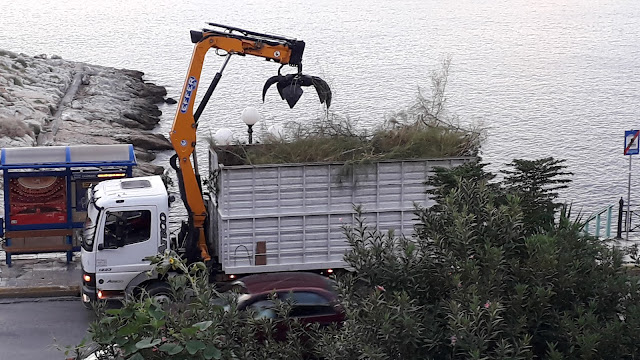 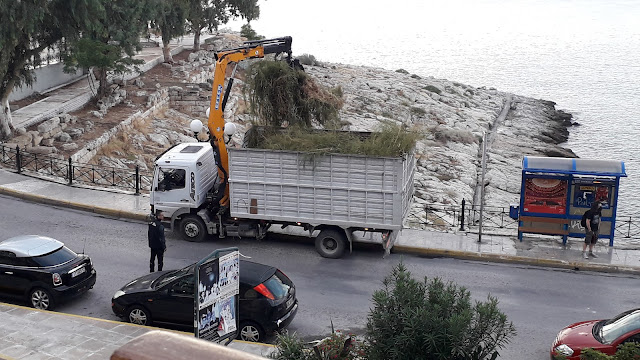 Our view of the water has ceased to be filtered through a feathery green screen and the edge now looks harsh and unforgiving.  It is all suddenly a bit bare and glaring, angular and unkind.  Bring back the prickly darned stuff I say and F supports me, but for different reasons... which just goes to show that you could find yourself voting for the same political party as someone you don't agree with and then wondering how that happened!